LEGOLAND WINDSOR ON A BUDGET

People who know me will know how much I love couponing and finding ways of saving money. Unsurprisingly, I absolutely love finding ways to have breaks/days out at a fraction of the price. My excuse is that it allows us to spend more on the bigger holidays abroad! Here’s our guide to enjoying a break away at Legoland Windsor on a budget.

When we decided we were going to visit Legoland Windsor on a budget, we waited for The Sun’s promotion to come around. Collect ten tokens (for about £6) and exchange them for two free Legoland tickets. If we’d not been able to do this, I would have looked for a coupon on cereal boxes or booked in advance online. This is usually cheaper than walk-up tickets.

Do you really need an extra night in a hotel?

We drove down to Windsor, eliminating the need for an extra night in a hotel. The journey was three hours but we were armed with plenty of snacks and breakfast, plus a few things to keep Noah occupied like his tablet and a magazine – he slept most of the way anyway!

We’d not planned what we wanted to see at the park so we set out on a loose clockwise tour. Noah, then aged four, seemed less interested in the rides, focusing more on areas where he could experiment with Lego and the adventure playgrounds. For this reason, I was thrilled that we hadn’t paid full price for admission. 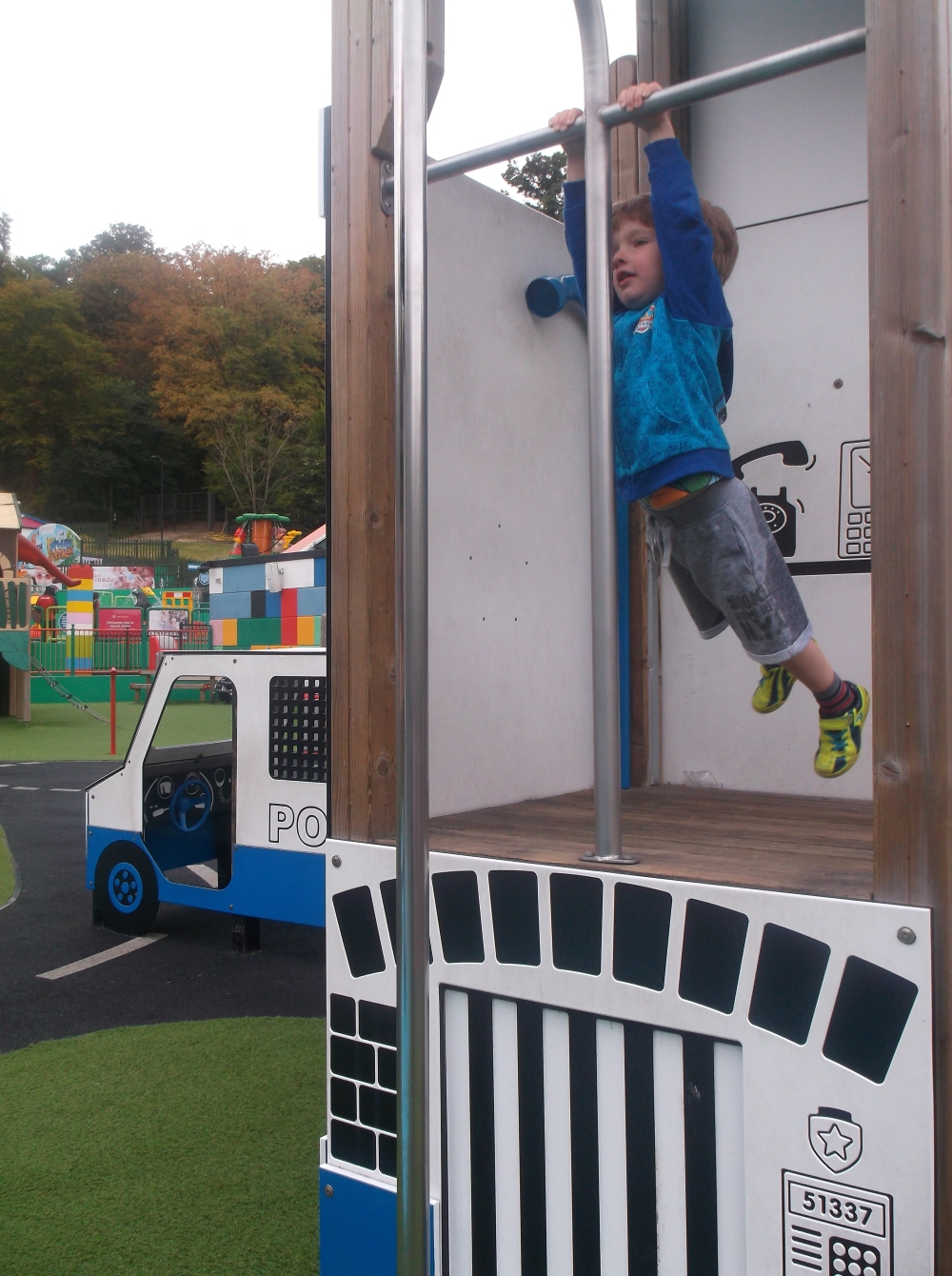 After sliding, climbing and playing ‘fire stations’ (this was during the Fireman Sam phase), we decided to go on a ride. We saw an entrance to a water ride that he was tall enough to go on. The lesson here is not to go on rides without first consulting the map. Concealed by greenery was a monumental twisting water slide. We gripped tightly to our little rubber dinghy when the ride accelerated to roaring speeds, zooming around corners, landing with a splash at the end. We waddled back to the safety of the playgrounds.

BRING YOUR OWN FOOD

After a picnic lunch we continued exploring the park. Noah persistently asked if he could play in the Duplo Valley ‘Drench Towers’, an outside splash park. It was a cloudy, cold day so we gave it a miss. I imagine it would be lovely to play in on a hot summer’s day.

We found ourselves in an area called ‘Lego City’ which was a big hit with Noah. His favourite activity was ‘Fire Academy’. Families are pitted against each other in the task of operating a fire engine, wagon style, and putting out the ‘fire’. We were far slower as a double act, compared to families of three or four people, but he enjoyed in nonetheless.

Another popular activity for him was ‘LDrivers’ where 3-5 year olds get the chance to earn their first driving license.

Before leaving, we visited the atmospheric ‘Star Wars’ exhibition. I think the presentation of these amazing Lego structures surpassed the exhibition we saw on our California trip at Legoland, San Diego.

My overall opinion of Legoland Windsor is that it appears a little run down compared to its American counterpart. This isn’t much of an issue isn’t an issue as there are tons of activities for little ones to take part in. Ideally, we could have done with two days to enjoy the park and see everything.

AVOID THE SOUVENIR SHOP, OR TAKE POCKET MONEY THE KIDS SAVE UP THEMSELVES

Leaving the park is difficult to do without purchasing an amazing Lego set to build, so yes, Noah chose a set (way beyond his years) for Mummy to spend an entire evening building. He spent his own pocket money but I made sure to give him the £5 off coupon I found attached to the park map.

IF NEEDED, THERE ARE COMFORTABLE BUDGET HOTELS NEARBY WITH FREE PARKING

That evening, we stayed at the Premier Inn, Bagshot. I really want to give this place a shout out because, for a budget chain hotel, I really felt as if the staff there went above and beyond. Our journey should have been less than twenty minutes, but our out of date sat-nav took us the wrong way. When we got there, I was really happy that parking was free. We were tired and frustrated but we were met with a very welcoming reception. To our surprise, in our basic but clean room, the reception staff had left us a little gift.

We had not eaten since lunch so we went to the Beefeater restaurant that was attached to the hotel. Noah was getting into hangry mode! I was so grateful that the staff immediately found us a table even though it was quite busy. Our servers were brilliant and attentive. Noah loved chatting away to them about his day at Legoland. I was also really happy that the menu was kid friendly.

We did pay extra for breakfast but kids eat free so in total our stay at the hotel cost £53. I thought this was excellent value. The breakfast was plentiful and varied, buffet style. Again, the staff were so helpful! Realising I would need to get up from my seat again to fetch something, a lovely waitress immediately came to my rescue, offering to go for me. Little gestures like this are wonderful when you’re a single mum because, although we love buffets, trusting and hoping your child will sit still for two minutes just so you can fetch yourself a slice of toast isn’t as relaxing as you might imagine.

Do you and your children love Lego? Brickish Weekend at the National Space Centre in Leicester may be of interest to you too!